Virtual Reality is the latest trend in the gaming world. We have outlined the best virtual reality headsets on the market today for you. If you haven’t purchased yours, you will find out what to expect or spot an upgrade to what you already have.

It is amazing how far VR has come in such a short time. In only a couple of years, immersive headsets have evolved simple devices to some of the most innovative, cutting-edge gadgets a tech-lover would gladly purchase. Practically every major company is now offering a VR headset. And every now and then, the quality keeps improving.

Key players like Microsoft, Google, and Sony have also put in stellar works that do not need a lot of cash to experience the world of virtual reality. Every company wants to own the best virtual reality headsets.

After testing and reviewing over a dozen of self-proclaimed best Virtual Reality headsets, here are our recommendations.

The HTC Vive ranks first in our best virtual reality headsets list. It is a VR gadget which was unveiled in HTC’s Mobile World Congress Keynote in March 2005 was the first consumer version of the device. It is a result of the joint efforts of HTC and Valve Corporation.

Vive also allows you to wander around the room to give yourself a different feel of the VR experience. This is possible through its motion controllers which vibrate to make you feel like you are grabbing things even when you actually aren’t. Its 110-degree field of view combined with a 2160 x 1200 resolution and a 90Hz refresh rate which makes this product a powerhouse. When you dive into the VR world.

HTC has a field of view of close to 110 degrees which refreshes itself at 90HZ. It also weighs about 470 grams compared to an older version that weighed 555 grams.

The camera faces the front enabling users to view the external world and a key component of the device’s ‘chaperone’ safety system.

At $599.00, the HTC Vive is a bit expensive compared to its competitors.

Vive is the most convincing argument there is that virtual reality isn’t just hype and wishful thinking. It will perform well on your PC, and you won’t feel any motion sickness. The price may be a bit high, but you will hardly remember that once you start using it.

The Oculus Rift is one of the Best Virtual Reality Headset developed and manufactured by Oculus VR, a division of Facebook Inc, released in March 2016.

The VR gadget has; an integrated sound system that is 3D and its headphones are both removable and exchangeable, has an input of 6DOF through USB connected IR LED censor which tracks via ‘constellation’ method and it’s Xbox controlled at one game per controller.

The Rift packs a resolution of 2,160 x 1,200 pixel. It may sound like a lot, but a VR headset places the screen just one or two inches away from your eyes, which means it is very easy to pick out the pixels. Some companies, for example, AMD, say fully immersive VR must pack up to 116 megapixels into a phone-sized display, standard.

At a recent cut price of $400, the Rift’s price is competitive compared to the rest.

If you desire a decent VR experience, you should buy Oculus Rift. The price cut makes it a sensible purchase. $400 is enough to get you the VR headset, the controllers, a couple of external sensors, and a handful of VR games.

AuraVisor All In One Virtual Reality VR Goggles Headset

Most virtual reality headsets fall into two categories; the high end (Vive, Oculus Rift) and glorified phone holders (Samsung Gear VR, Google Cardboard, et al.) AuraVisor belongs to neither. It offers a third alternative, the freedom of an untethered headset; everything is built-in the visor.

This VR is the world’s first wireless headset to appear in the best virtual reality headsets list. The AuraVisor contains everything you need to immerse yourself in the virtual reality world fully. It comes with an inbuilt battery and micro USB charger to ensure you get a 3D VR experience on the go.

It packs a powerful quad processor which run its immersive 5.5 inch 1920×1080 high definition screen. The lack of cables, BLUETOOTH 4.0 and WIFI al combine to afford you 360-degree freedom. Running Android OS 5.1 gives you the freedom to run all popular games and apps, and with 32 gigabytes of internal storage, you are never short of space to store your favorite games and videos. 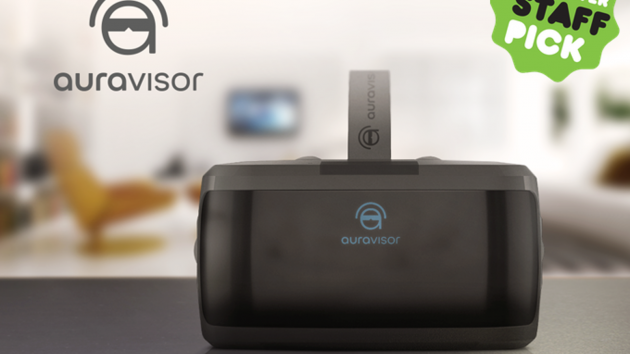 It runs on the following specifications;

The AuraVisor $399.99 which I feel is a little bit high all factors put into consideration.

The lack of cables is an obvious advantage. It also solves the glaring problem of children that might not have access to a smartphone — or removing potential inequalities between children who have smartphones and those that don’t. Definitely worth a try.

It might be over a year since its release, but the PlayStation VR is still in the best virtual reality headsets ranking.  And it is different from its competitors. Not only is it a cheaper substitute, but it also only requires a PS4 console to run.

PlayStation VR can handle 1080p games on its 920 x RGB x 1080 OLED display at either 90Hz (meaning that the image refreshes itself 90 times per second) or at 120Hz depending on the VR game or application. In case you are worried about latency, PlayStation VR’s response rate is locked in at around 18ms according to Sony. That makes it 0.002 seconds faster than the highest acceptable latency before.

The PlayStation VR headset runs on the PS4’s AMD Radeon GPU, which is far less potent than the minimum requirements for a Vive or Rift-compatible PC. It also has a 100-degree field of view, which is slightly smaller than the Rift and Vive.

This beast is available on Amazon at $264 which is not cheap by any means but compares well with other headsets.

The Sony PlayStation VR is an affordable introduction to virtual reality. You will never enjoy an experience as crisp as that of the Oculus Rift and HTC Vive but, for a system that is supported on PS4 in place of a costly PC gaming rig, there can only be a few complaints.

The Samsung Gear is arguably the best virtual reality headsets. The Gear VR controller is a small Bluetooth joystick designed to almost disappear in your hand. There’s a small trackpad at the top of your thumb to rest on, a trigger on the front for shooting games and the rest of the Gear VR controls from the side of the headset in live on the body.The volume rocker is easy to find when your eyes are engaged and home back buttons feel the same extent of familiarity too.

The controller itself goes for $39 and together with the headset, it will set you back some $129.

The Samsung Gear VR w/Controller is exactly what you would expect from Samsung. It gives you a large-scale, motion controlled virtual reality at an affordable price. It is a timely reminder that mobile VR can be as good as Oculus Rift and HTC Vive.

Best Virtual Reality Headset For You

There has been increasing VR headset ownership that makes it draw attention from several businesses unlike when it was just the gaming industry. But because virtual reality is a good storytelling that makes many entertainment and media companies such as magazines and movies, there is an increasing usage of VR videos.This is probably the main factor that makes VR headsets become the mainstream of display.

Vr’s adoption and development are difficult to predict, and there are several paths it could take.

What do you think is the probable future of VR? Share your views in the comments below!