Google has certainly become the king of free public cloud tools. It’s Gmail service hit the 1 billion user mark in 2016. Most of those users may not know that they have access to a wonder feature known as Google Drive Collaboration.

There’s a whole world of productivity tools that you can get for no money thanks to that Gmail account. The most useful of which is Google Drive and its suite of office-like cloud applications.

Google Drive itself is a cloud storage platform similar to DropBox or Box. But while those other two services are essentially a big hard drive in the sky, Google Drive give you the tools to not only store a wide variety of files but to produce them as well.

There are several office-like cloud applications that are integrated with Google Drive:

There are also more 3rd-party apps that can be connected to Google Drive, but we’re not dealing with those here. Each of these apps lets you create a particular type of document.

For example, a Google Doc is a word processor document. A Google Sheet is, you guessed it, a spreadsheet.

Have you ever needed to work on a Word document along with other members of a team? How did you go about it?

Sometimes everyone in the group will write their own contribution to the document and then one person has to integrate them all. Other times people will work on a document in turns, a sort of “round-robin” method.

Neither of these is very efficient and this sort of collaboration can take ages. That’s not an issue with cloud-based Google Drive applications. There is only one copy of the document and all team members can work on it at the same time.

It’s a Kind of Magic

There’s something really magical about seeing the rest of your team all present on the same page. Each with their own cursor, happily typing away at the document in question.

Not only is it dead easy, it will save you a ton of time and possible money. So let me walk you through the steps of getting Google Drive collaboration to work.

The first thing you want to do is create a new document that you and your friends can collaborate on. It’s pretty simple. Just click the big blue button that says “NEW” 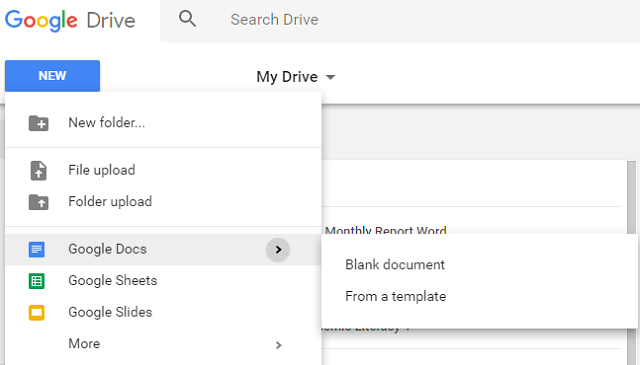 In this case, we’re making a word processor document known as a “Google Doc”. Just click the document type you want to make and it will open in a new tab.

Note that you can also create folders, which makes it easier to keep all of your different drive documents organized. It’s also often easier to share a folder with a group of people so that everything put in that folder is automatically shared with them too.

Next, you want to give your document a name. This is the document name that all other people you share it with will see. It’s also the name by which you’ll search for the document in future in Google Drive itself.

So give it a good descriptive moniker and then we’re ready to start adding other playmates to the pen.

At the top right corner of your new Google Doc, you’ll see another blue button that simply says “share”. That what we want to click so that we can invite other people to the document.

Click on it and the sharing window will pop up so that you can tell Google how exactly you’d like to go about sharing the document.

Let’s go over each of the features here, since there’s a lot packed into this little space.

Under “people” you can enter email addresses or names of people in your contact list. If they have a Gmail address they are directly added to the document, but other emails get invitations to work on the document.

It’s highly preferable to only use Gmail contacts since anyone else gets a link that anyone can use.

That little drop-down with the pencil is where you choose what level of access to give your invitees. You can give them full editorial right, the right to comment or only the right to view. Under advanced options, you can also specify that people with editing rights can’t add new people or change access levels.

If you don’t want to strictly enforce access control, but want to make it easy for anyone to access a document, you can always generate a shareable link. Anyone who has the link can use it to access the document.

You can also set it so that anyone with the link can edit, comment or view it. This makes it easy to share with large groups of people.

So now that you know how to invite people to the party, let’s look at te actual process of Google Drive collaboration.

Google Drive Collaboration for All

Whenever someone with editing rights accesses the document, you’ll see a little icon representing them pop up at the top right of the screen. You also see their edits and color-coded cursor working in near real time.

You can use Google Hangout to communicate if you’re online at the same time, otherwise, it’s easy just to leave a comment.

Another powerful function is “suggestion mode”, which you choose by clicking the “editing” button at the top right and switching modes. This works almost like “track changes” in Word but turns your edits into suggestions that other members can accept or reject.

Once you’ve had a taste of Google Drive collaboration it’s pretty much impossible to go back to the old ways. If you want to be even more productive check out our guide on Trello. If, on the other hand, you want to be unproductive, here’s a guide on how to play retro DOS games.

1 thought on “How to Use Google Drive Collaboration”