How to Stream PC Games to a Tablet or Smartphone 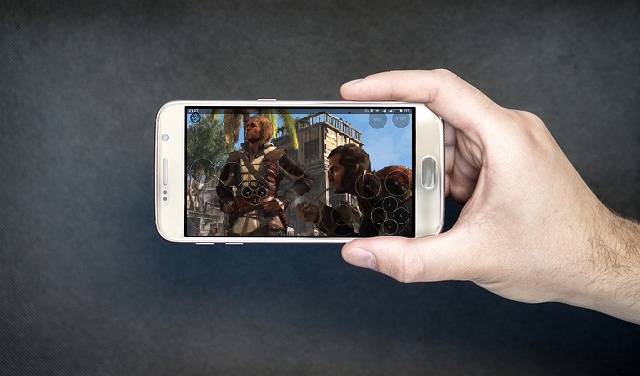 How to Stream PC Games to a Tablet or Smartphone

Having a gaming PC is an awesome experience. You get the best graphics, the widest selection of games and the satisfaction of customizing your machine to your own needs. We don’t always want to play at our desks, though, so lately it’s become popular to stream PC games to other devices so that you can enjoy PC gaming away from your actual PC.

There are a couple of ways you can achieve this. Steam, for example, let’s you stream to a list of pre-approved devices. These includes other PCs that have the Steam client and Steam OS devices.

You can also try to use a generic VPN solution, but they are not very well optimized for the real-time needs of video games. Luckily there’s a much better solution in the form of the free Remotr app.

So What’s the Catch?

So first off, yes Remotr is completely free. There is a paid version, but the only difference that makes is that you don’t have to look at ads. If you can tolerate the light amount of advertising you don’t have to pay to stream PC games.

The app is available for iOS and Android and has been specifically built to stream games. The list of features it comes with covers pretty much everything you’d want in a game streaming application and I’ve been using it quite a lot.

See? I think that covers all the bases I can think of. So let’s look at how you actually go about making use of Remotr.

First of all, you need two pieces of software. The first is the app for your mobile device and the second is the actual streaming client, which goes on the computer you want to stream PC games from.

Just head to remotrapp.com for links to everything. Download both programs and install them. Once that’s done, we’re ready to set up the streaming part. Of course, do make sure that the computer you want to stream from has Steam or Origin games on it.

Before you can actually use either application you need to register an account with Remotr. Yes, it’s a pain if you only want to do local streaming, but it’s quick and painless.

Once you’ve registered you need to log in on both devices.

Unless there’s something wrong with your network setup, you should see your computer show up in the list of streamers like this.

Of course, if you are not connecting to it over local WiFi then you’ll see it listed as “remote”. If you’re on a mobile network, be mindful of the data charges when you stream PC games.

If you tap on the streamer of your choice, you’ll be presented with a list of the games that are installed on that machine. Just scroll up and down until you find the game that you want to play. It should look like this: So let’s play some Assassin’s Creed and see how it goes. Just tap on the game and it will start up on the host machine.

When the game is booted up on your computer, you’ll see it appear on your phone or tablet. Given that your network speed is up to it and your computer has the grunt, you should see a crisp 60 frames per second image with very little (if any) lag.

In this case, I’m using the on-screen controls to play. You’ll notice that the app is fully emulating a standard Xbox360 controller. That’s not the only control option, but we’ll get to that shortly.

When you are done playing, just tap the Remotr icon at the top left of the screen and tap “disconnect”. This will (obviously) disconnect you, but it will also kill the game if you didn’t manually exit.

You may recall that I mentioned Remotr also supports physical controls. Getting them to work is pretty darn easy. If you are on an iOS device and you have an MFi controller it will automatically map all the buttons as they would be on an Xbox control.

The one catch is that MFi controllers don’t have clicking thumbsticks. So you’ll have to use an on-screen workaround. When it comes to a Bluetooth Keyboard and mouse, just connect them as you’d connect any Bluetooth devices. Remotr will pick them up.

Best of all, on Android devices, you can use an OTG USB adapter to plug a wired gamepad directly into the phone or tablet. That means there’s no compromise, it’s just like playing on the PC directly.

If a game runs smoothly and without issues directly on your computer, but it’s choppy on your mobile device, there are some things you can do.

First of all, try to connect the computer to your WiFi router directly with ethernet. That will remove some lag and hopefully speed everything up.

You can also try lowering the stream quality, but you have to trade off smoothness for blurrier graphics in that case. However, on small phone screens, this does not always matter all that much.

Remotr is not perfect, I had to tweak things quite a bit until I could get a good mix between quality and performance. It is, however, the easiest and most game-friendly streaming app I have yet to move.

Of course, if you know of a good alternative please share them in the comments. Also, let me know if you were able to get good results with Remotr.

Did you know that you can do more with your device than stream PC games? You can use a tablet or phone as a second screen too or maybe you like the other kind of streaming. In that case, you may enjoy my Kodi guide.