4 Reasons NOT to Buy a 4K TV Today 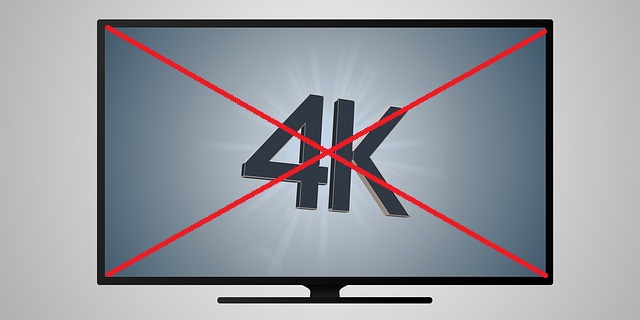 4 Reasons NOT to Buy a 4K TV Today

I’m the last person in the world who can accuse other people of buying technology too early. I owned an iPaq for goodness sake. However, 4K televisions are just starting to edge into the realm of affordability. So is it time to buy a 4K TV?

I don’t think the time is right at all, and to explain why here are some reasons you should NOT buy a 4K TV.

Obviously, not all reasons will apply to you personally, but I think there are good general facts that point to the conclusion that 4K TVs just aren’t right for Joe and Jane Public.

1. There Nothing to Watch

4K content is still pretty scarce. Yes, you can get lovely 4K movies on BluRay, but that format is on life support.

The only real source of 4K content is internet streaming and downloads. That’s a problem because 4K video is HUGE. Video codecs are improving, but worldwide average bandwidth is only now making 720p and 1080p streams common.

Most of the content on services like Netflix is not 4K and it already consumes most of the bandwidth on the internet in North America.

Clearly, it’s going to be a while until the net has enough bandwidth to sustain any sort of demand for 4K.

The new generation of gaming consoles (the PS4 Pro and Xbox One Scorpio) are being marketed as 4K consoles. We already have the PS4 Pro and it turns out it’s not really a 4K device. It just upscales a lower-resolution picture.

At this point, there’s no reason to think the Scorpio will be any better. Even if it is, you might as well wait until it launches before pulling the trigger to buy a 4K TV.

That means only high-end PCs can pump out native 4K gaming, but then you should just buy a 4K PC monitor. Something that I have no issue with and I’ll say why a little later.

2. They Cost Too Much Prices on 4K TVs might be coming down, but affordable 4K TVs are not the best quality brands or technology you can get.

Remember that resolution is only one part of the recipe when it comes to your perception of visual quality. It’s not even the most important one.

What else matters? Here are some other things you should care about:

This is why 720p plasmas looked so much better than early 1080p LCD TVs. Sure the resolution was higher, but those panels could not match the color, motion and black levels of plasma technology.

Today 1080p TVs are affordable and mature. For the money you would pay for an entry-level 4K TV you can get a high-end 1080p TV with amazing picture quality and (as per reason 1) most of what you can watch today is 1080p anyway!

3. You Can’t Tell the Difference (Mostly) While an LCD screen has a fixed resolution, how many pixels your actual eyes can resolve depends on how good your eyesight is and how far away you are from the screen for a given screen size.

Past a certain distance, all current TV resolutions are indistinguishable at a given screen size. So whether you can even tell the difference between 1080p and 4K will depend on where the TV is and where you’re sitting.

This means that you may need a bigger TV in order to enjoy any benefit from having a 4K set. Which pushed the price up even more and comes with other practicality issues.

So before you even bother to look for 4K TVs in your price range, check out if your living room can even accommodate a 4K TV that will make a difference.

It may make me sound like a Luddite, but there is nothing actually wrong with your current HD TV. In fact, unless you put your TV and a 4K TV side-by-side running 4K content, you’d be hard-pressed to tell the difference.

The marketing push behind 4K is getting stronger and stronger as production ramps up, but you have to think hard about whether the difference between what you have and what a 4K TV brings to the table is worth the money and effort.

When you go to your local electronics store, stand as far away from the 4K TV as you’d be using it at home. Maybe ask the store to put a comparable 1080p TV next to the 4K model.

Give them a good hard look and be honest about whether any difference matters in real terms.

The other thing you have to be aware of is that floor demo TVs are set up to be far brighter and saturated than you’d ever use them at home. So ask the attendant to let you tune the settings down to something more normal.

While I don’t think it’s worth it to buy a 4K TV for your lounge, that doesn’t mean 4K itself is pointless. You can’t tell much about 4K 10 feet away from the screen, but when you are working with a computer at a desk you are only a foot or two away from the screen.

The extra screen real-estate is of real practical importance. A 4K monitor could mean that you don’t need a multi-monitor setup to do work such as video editing or just heavy multitasking.

If you’re a hardcore gamer then a computer is also the only place where you’ll get true 4K gaming with the latest AAA games. That is if you have the computer to handle it.

In the end, if it means that much to you and you’re convinced that it is worth it, go ahead and buy a 4K TV. Just don’t buy a 4K TV for the wrong reasons or (even worse) no real reason at all. If you’re still in the market for a 4K TV, let me know why you want one in the comments.

Kees Friesland
Read More
Scroll for more
Tap
Do You Still Need a Laptop?
Why Your Next PC Should Be a Mini ITX PC