Will Steam Direct Publishing be Better than Greenlight? 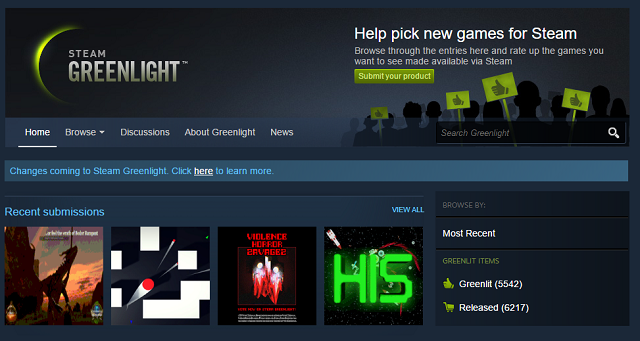 Will Steam Direct Publishing be Better than Greenlight?

Steam is without a doubt the largest and most popular digital distribution system on the PC.  Gamers love Steam, but the new Steam Direct publishing system has lead to quite a lot of heated debate on the internet. Will it be better and save Steam from it’s biggest problem? “What problem?” did you say? Steam has a shovelware problem and so far nothing seems to have helped stave off the flood of terrible video games that end up on its virtual shelves.

Greenlight was meant to be a way for the community to provide quality control for new games, but it’s clear now that this has utterly failed. It was inevitable that Valve would try something to stem the tide of filth.

Steam Direct publishing is being released as a replacement for Steam Greenlight. It represents a different approach to evaluating games before they go on sale. To understand why this is happening and why Greenlight is a problem, you need to know how games make it onto Steam.

Getting the Green Light

Just like any other retailer, Steam has to decide if it will stock a particular item or not. When you’re dealing with a big publisher like Square Enix or Ubisoft, this isn’t a problem. AAA or otherwise big-name developers are obvious choices. If other major retailers are selling a game, it’s likely Steam will too.

But PC gaming is far more than just AAA studio releases. There is a massive and thriving indie game scene and there has to be some way to decide if these games should be on Steam or not.

The problem is that there are thousand and thousands of these small indie games being released every month. It would take more people than Valve could ever employ to evaluate each one. Which is where Greenlight comes in as a community-powered quality assurance system.

Greenlight is pretty simple to understand. Indie developers who have a finished game submit it to the Greenlight process. All they have to do is provide several media items (like screenshots) and pay a small fee of $100.

The game then goes on Greenlight and users can see all the info that made up part of the submission. Based on that, each user gets to vote on whether they want to see that game or not. It sounds like a great idea, right?

Well, for a small indie getting their game on Steam is like Walmart deciding they’re going to stock your home-baked cookies. Suddenly millions of people will have the chance to buy your product.

That’s the dream that many indie developers want to live, which means there’s immense pressure for them to get their games on Steam Greenlight.

So what do some developers do? They cheat! It wasn’t long before indie developers simply started buying votes with free copies of their game. There are other underhanded methods as well, but the bottom line is that games are making it through Greenlight that shouldn’t.

That’s why we’ve got a truckload of truly awful and slapdash games on Steam. Apart from games that are simply the product of mediocre talents, there are shameless scam games that use pre-made assets lazily stitched together. There’s no real “game” here and plenty of people get scammed out of their hard-earned cash.

Don’t just take my word for it, though. The alway-incisive Jim Sterling explains it best.

How would you feel if you had to dig through trash like this just to find the few good games that are worth your money or time? I didn’t think so.

So now Greenlight is being shut down and we’re getting something called Steam Direct publishing. What this means is that the community will no longer vote on these games, but the publisher will fill out an application which Valve will review.

There’s a fee involved, but how much it will be is not yet set. According to Valve, they are debating anything from $100 to $5000. The fee is recoupable, so presumably, if your game does not suck you’ll get your money back.

We honestly don’t have much info about Steam Direct publishing yet, but there are already quite a few concerns voiced by concerned indie developers.

The access fee is obviously a major bone of contention. The fact is that the $100 fee for Greenlight was barely enough to keep purely joke submissions out of the system, but the profitability of asset flip or other junk games is too much for such a small amount of money.

On the other hand, even $100 may be too much for indie developers in developing nations to afford it. So there’s already an outcry about exclusion from the marketplace.

Third-party organizations are already offering to fund deserving indies that won’t have the money for Steam Direct publishing.

The problem is that Steam is under no obligation to consider a game and there are other places for indies to sell their games. Basically, if you can’t afford the Steam Direct publishing fee you need to sell your game elsewhere until you do.

Will Steam Direct Publishing Be Better?

Having a more hands-on approach and raising the bar for entry enough is probably going to have a dramatic and positive effect on the Greenlight shovelware problem.

Yes, it also means we may miss out on the next Stardew Valley, but if left unchecked shovelware may well kill Steam as a whole. From that point of view, Steam Direct publishing seems like the lesser of two evils.

Kees Friesland
Read More
Scroll for more
Tap
What we know about the Apple iPhone 8
Should You Upgrade Your CPU?