What To Look For When Looking For The Best Budget Liquid CPU Cooler?

What To Look For When Looking For The Best Budget Liquid CPU Cooler?

Since its introduction to the tech world, there has never been a more effective way to absorb heat from your CPU than liquid cooling. It pulls away heat much easier using a liquid coolant.

Liquid CPU coolers used to be a luxury – a Rolls Royce if you will – of CPU cooling systems with customizable parts, intricate piping layouts and expensive pumps. This made liquid cooling quite an elitist concept that is only accessible to those who can afford it. As a result, casual PC users are stuck with conventional air coolers that don’t remove the heat when the processing gets a bit tougher.

However, in recent years, the game has changed as several companies have brought liquid cooling to the mass market. Now that they’re more affordable than ever, there’s no excuse not to include it in your rig! 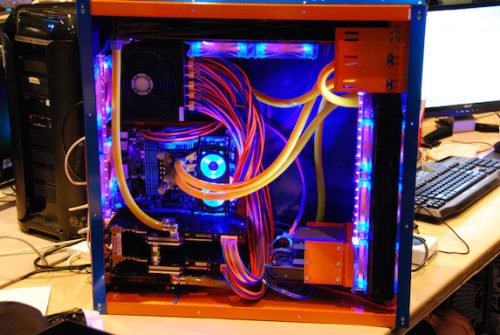 It’s definitely wise though to study your selections carefully before making a purchase. Avid gamers – especially those who play for hours on end – should be more picky in choosing a liquid cooling unit.

The blocks tend to be bulky in most cases but that’s one characteristic that is not much of a concern unless you’re extremely picky about the size of the components of your rig. Budget liquid coolers may not be stylish but they’re not half bad – and certainly don’t look like they came out of a horror movie!

For its value, the tubings should be decent enough and of high quality. Durability may be questionable as some products come in soft rubber. However, with good cable management, you can manage to make it last.

The radiator sizes vary as it does in premium liquid coolers, but with regards to entry-level performance, the best budget liquid CPU cooler can stand up against its high-priced counterparts.

Even with the stock fan, the best budget liquid CPU cooler operates quietly with low hums, with the pumps also being barely audible. It will allow your system to run at near-silent levels,.

If you feel that it’s not silent enough, you can swap out the stock fans with ones of your choice.

Check out this video to help make your PC a tad quieter:

The installation process is pretty much the same with premium liquid coolers. With some of these budget kits though, you might have to remove the motherboard first from the case before installing it. It’s not a deal breaker, but for some who aren’t comfortable removing their boards, this might be a problem.

One quick reminder though: For most low-priced kits, it is important that you don’t tighten the radiator too much to the case as it might strip off the threads and mess up the hold on the screws.

The temperature rise maxes out at 60 degrees Celsius for stock CPU settings. Even at hardcore overclocking and high voltage, the temperature doesn’t go beyond 80, usually settling down in the mid 70s even at full load, which is still better than the most expensive air coolers out there. This matters even more to countries with tropical climates where year-long summers can punish your system’s overall performance.

Budget CPU coolers are well-rounded cooling solutions that pack incredible value especially for those who are not ready to do DIY liquid cooling rigs. Choosing one of these all-in-one kits provides the most bang out of your buck.

Regardless of the CPU cooler product that you choose, what’s important is that you keep your PC cool.

If you’re looking for peak performance level of liquid coolers with all of the bells and whistles, take time to research on the best liquid CPU coolers in the market. You may choose from the best budget liquid CPU cooler to the premium-priced products.

Neal Bricker
Read More
Scroll for more
Tap
How Does A Liquid CPU Cooler Work?
What Is A Dual CPU Liquid Cooler and Is It Worth It To Buy One?