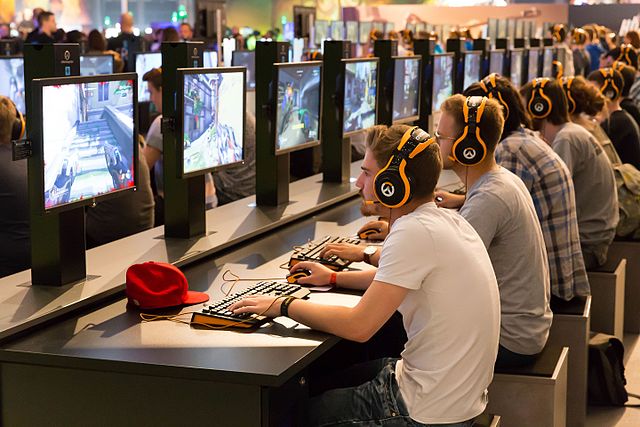 The average person is probably not all that aware of it, but there is an ever-growing movement of competition known as “eSports”. These are events where video gamers play competitively and professionally. The question is if eSports are real sports and that’s what I’ll be weighing in on here.

Back in the Day

One of the earliest games, Spacewar!, could only be played on PDP-1 workstations from the 1960s had competitive games hosted by Stanford University in the 1970s.

There were arcade record competitions held by organizations like Twin Galaxies and even TV shows where players competed for prizes in home console or arcade games.

The modern competitive gaming scene is however mostly a product of networked multiplayer video games. Where individuals or teams can compete against each other in various types of games.

From team first-person shooters such as Blizzard’s Overwatch to real-time strategy games such as, er, Blizard’s Starcraft. Yeah, Blizzard makes a killing in this industry.

With a whole generation of kids growing up on these multiplayer games and the natural human drive to compete, it was inevitable that informal LAN party events would turn into something a lot more professional. But that by itself still doesn’t mean that eSports are real sports.

Bolstering the argument that eSports are real sports is the rise of the industry as a spectator phenomenon. Just a decade ago it would have been unthinkable that a mainstream sports channel would show video games competitions.

Yet, ESPN is super serious about covering eSports events and is paying a lot of money for the privilege. It’s understandable given the attraction of getting in on the ground floor for a whole new category of competition.

Does the fact that ESPN covers something make it a sport? Are eSports real sports because it’s being legitimized as such? After all, ESPN also covers things like Poker tournaments, chess, darts, and pool. All games that are also contentious as “sport”.

The Definition of Things

If society as a whole starts redefining a word, then the dictionary is the one to change. iT’s just a documentation of living language. Still, this is what the Oxford dictionary tell us about the word “sport”:

“An activity involving physical exertion and skill in which an individual or team competes against another or others for entertainment.”

So do eSports live up to this simple definition?

Wha parts of the definition of sports we lifted from the dictionary actually apply to eSports? Well, first of all, it is a form of physical exertion. Playing games competitively is exhausting.

Have a look at this video on the concept of “APM” or actions per minute:

Keeping up that level of concentration for hours a day, almost every day, is physically grueling. Professional eSports athletes have to take care of their physical health if they want to be competitive and they certainly have to exhibit supreme focus and endurance to have a chance at making it.

The presence of skill, team play, and entertainment are even more obvious. So really the only contentious part of whether eSports are real sports is the degree of physical exertion.

Making it Up Along the Way

In the end, the meanings of things come from us. We assign meaning, we don’t discover it like you find gold or iron ore. eSports are real sports if people accept them as such. We were the ones to define sports in the first place.

Never mind the fact that creating a definition for concepts like “games” or “competitions” that accounts for everything we recognize as earning those labels is impossible. There is always something everyone agrees is a sport that has little or no resemblance to another accepted sport.

In the end, it’s really the supporters and fans that will elevate eSports into the realm of professional sports such as Football and Baseball. Whether your game has only some physical exertion or a lot, eSports are real sports in all the ways that matter.

How to Get Into eSports

For some of you who have never watched eSports, you may now be wondering how you could get into it to see if you like it or not. Obviously, you can watch something like ESPN or go searching on YouTube for eSports coverage, but there are more places you can go:

There’s also a whole bunch of different types of eSports. Just as there are many other kinds of sports. Some will be more appealing than others, but here are some key types you can look at to see the most popular genres.

These are just mainstream types of eSports. There are many, many more quirky and eccentric games that players have somehow found a way to compete in.

So, eSports are Real Sports? In my opinion, eSports do fit the definition and the spirit of traditional sports. They may not make players sweat and grunt in the same way a game of rugby or football does, but they require the same singular and impressive skills and practice of “real” sports.

To get your own game on, why not learn how to set up PC game graphics or how to record your gaming achievements with OBS.